Should You Get a Roofing Estimate or an Inspection?

Many people tend to assume the worst when their roof springs a leak, and go straight to asking for roof replacement estimates instead of having their roof inspected first. In today’s post, asphalt shingle and metal roof contractor Dynamic Roofing Concepts, Inc. explains the differences between roofing inspections and estimates, and which situations call for them. 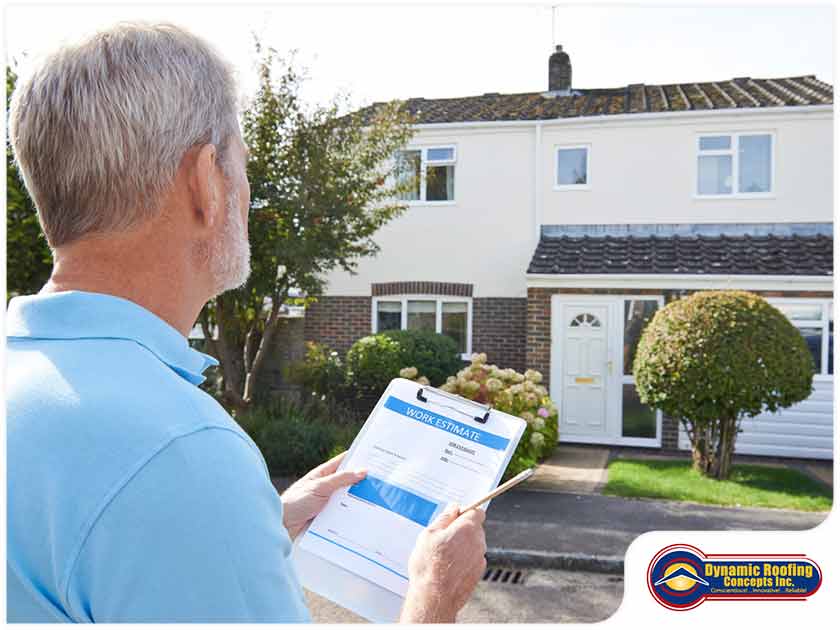 A roofing estimate is a document that breaks down the cost needed to fix a specific issue. It lists the cost of labor, materials and the timeframe of the project. An estimate doesn’t always have the final cost locked in, as the cost of materials or other necessities, like fuel, may change until a contract is signed. Responsible roofing contractors would determine the root of the problem before drawing an estimate, there are inexperienced or unscrupulous ones who will take the homeowner’s word for it.

Some contractors use the terms “estimate” and “quote” interchangeably, but there are a couple of distinct differences. First, the costs stated in quotes can be guaranteed by the contractor for a certain period before the client decides to sign it. On the other hand, an estimate, as described above, may change until the client signs a contract. Second, a quote will become the contract once signed, while a separate contract will need to be drawn after a client reviews and approves the estimate.

A roof inspection is the process of inspecting every aspect of the shingle roof. The chief difference between hiring a roofer for an estimate and an inspection is that the latter doesn’t focus on a specific problem. During a roof inspection, every aspect of the roof will be checked for issues. Instead of simply patching a leak, an inspection will reveal why the roof was leaking. Other potential roof-related issues may also be found during inspection. Roof inspections are done at cost, but at the end of it, you will be given a repair and maintenance plan that can help prolong your roof’s service life, in addition to addressing the problem at hand.

Which One Do You Need?

The question you should ask yourself is, “how much do I know about my roof’s condition?” If you already know the cause of a roof leak, then you can go straight to getting an estimate. This can also apply in situations where your insurance provider will cover the repair costs, as they often require an estimate for filing your insurance claim. An inspection is needed if, using the previous example, you know there’s a leak, but you don’t know where it’s coming from or how to fix it.

Dynamic Roofing Concepts, Inc. is your leading provider of asphalt shingle, metal, and tile roofing systems. Give us a call at (813) 657-7663. You can also fill out our contact form to schedule an appointment. We serve customers in Tampa, FL, and surrounding communities.

I was impressed with this firm's professionalism. The estimator went over all the options with me, answered my questions about preventing hurricane uplift, provided four variations of the estimate, and went over the contract thoroughly. The construction team stayed in touch with me about the start date, and showed up exactly when promised. The team leader was dissatisfied with how a flat part of the roof turned out, and had the team redo it. He also followed through on the estimator's promise about the flashing around the chimney. Afterwards, they arranged for an inspector to prepare a report, so that I could get a discount on my homeowner's insurance. The inspector was also prompt, and I received the report via email a couple of weeks later. I also received the 25-year warranty certificate by mail. Shortly after the project wrapped up, I noticed a piece of vinyl siding just above the flat roof was dislodged. I hadn't noticed it before because it isn't easily visible from the ground. I emailed my contact at Dynamic, and about a week later I noticed it had been fixed. All in all, I have been very impressed by Dynamic's commitment to quality and to customer service.... [more]

The company gave an estimate using Google Earth when I initially called. A representative came to the house the following day to explain the materials, what's included in the price, discussed potential additional fees if rotten wood was found, handed me the price list for additional materials, and he let me know about rebates. I signed a contract and they performed the work, as promised, within about 2 weeks.... [more]

Overall experience with Dynamic Roofing was very good. Highly Recommended. Chris came out for free estimate and went over the price, warranty and procedure of the replacement. Roof replacement plus replacement of some of wet facia boards were done within 2 days! Very good work! Thanks.... [more]

Went well, price was competitive with other quotes. Their guys finished the project in 1.5 days.

The company was quick to respond with offering an estimate. Their contract clearly outlined what was included in the estimate & what fees would be added should additional materials (plywood etc) be needed. I appreciate being told about various available rebates.... [more]

Chris came out for a free quote after first phone call. Then after three weeks the crew came out to do the job. It took two days to finish the whole project. Overall the experience was easy and smooth. They cleaned up everything afterwards. I got three quotes at the beginning and their price is the best one. Also my neighbor also used their service.... [more]

Very well. Would recommend to others.

Chris Fanni came out the first time and presented the information regarding the type of roof shingles and the warranty and a total estimate. He was very professional and thorough. He was very patient with us and answered all the questions and concerns we had. My husband was not present during this time so I ask Chris to return and discuss all the details with my husband and he returned and explained everything again. This was really commendable, because Chris does not live close to our house. Colin, the owner of the company came out to make sure all the work was going well. He communicated promptly with my husband and answered all his questions. He returned calls quickly and was a pleasure to speak with. If you are having a difficult time deciding on whom you should pick for a new roof I would definitely choose Dynamic Roofing. The only reason I give them a B for Punctuality is because it took a little longer to complete the roof than we expected, but these were issues that were understandable.... [more]

They arrived on time with a small crew and did a thorough and professional job. I would definitely recommend them to anyone that needs roof work done.... [more]

Roof looks GREAT! I've gotten several compliments from the neighbors. Some of the older folks have commented that "those guys really know what they're doing". To me, that's high praise!... [more]

I checked out several contractors and ended up going with Dynamic Roofing because the price was reasonable and the contact with Dan was very pleasant. I was particularly pleased with the cleanup daily after work was completed with no scraps or nails in the flowerbeds. I highly recommend this company, they did everything they told me they're going to do. Our roof was replaced along with damaged plywood. This included the trim around the roof edge and the removal and reattachment of the gutters. A wind mitigation report was completed as well.... [more]

Great Professional Work! Colin and his crew are the best in Tampa! After 6 years we sold our house in Thonotosassa that was done by Colin. We had 2 bad tiles he replaced free of charge and did it in a timely manner. Our new house in New Port Richey will need a roof soon and Dynamic Roofing and Colin are the ONLY company we will use. Why use anyone else? Thanks, Colin... [more]

We were impressed by the service we received from Dynamic Roofing Concepts. They initially showed up on time with a very professional proposal. The work was completed in a timely manner and was done very neatly, and they were great with their cleanup. They are a professional organization, and I would definitely use them again.... [more]

I have never had a roof replaced before, so I did some researching. I also asked some neighbors that used Dynamic roofing what they thought about the process. They were very satisfied and that's what caused me to use their company. I was totally satisfied with the process. Chris explained the process. Licenses and insurance were presented without asking. The materials were of high quality. The workers made the process look easy but they surely worked hard and tirelessly. Colin came out during the replacement to check on things. Everything was cleaned up properly upon completion. The roof looks great. I keep looking at the roof each day in amazement. The entire end to end processing from working with marketing, the actual roofers and engagement with the owner went well beyond our expectations. Thanks to all for such great service.... [more]

The job took two days. It looks good. I was particularly pleased with the cleanup after the work was completed with no scraps or nails in the flowerbeds. The Wind Mitigation Inspection report indicated perfect compliance with all codes, and as a result I expect a discount on my Home Owners Insurance.... [more]